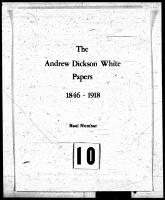 A prospective student wrote on July 10, If the faculty all resign I suppose I shall be compelled to go elsewhere. The correspondence for the summer was largely concerned with recruiting additional faculty, constructing Sibley College, and laying plans for accepting women students. Goldwin Smith wrote on July 26 that he hoped there was no foundation for talk of admitting female students, We should sink at once from the rank of a University to that of an Oberlin or High School. In the fall White entertained two distinguished guests from England, James Bryce and Thomas Hughes. A German scholar living in Vermont came to Ithaca to use the Cornell Library and wrote to White almost daily through the late fall, insisting he be given a place on the faculty. The cares of the presidency of the growing university moved White to draft a letter of resignation to Alonzo B. Cornell on October 25.White's tour of Santo Domingo in early 1871 as a member of President Grant's commission was described in letters to his wife. Those addressed to Fiske were intended for publication in the student magazine, the Cornell Era. Newspaper reports of the loss of the Tennessee, the ship carrying the commission, brought a number of letters of encouragement to Mrs. White.The first replies to questions White sent to other colleges concerning their experience with coeducation arrived in June.