The Functional Significance Of Microgeographic Dialects In A Hermit Hummingbird. 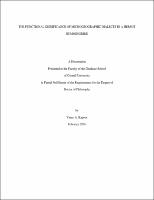 In this dissertation I examine the functional significance of microgeographic dialects in a lek-mating hummingbird, in four parts. First, I develop a novel song analysis tool, based upon techniques first developed for human speech recognition, to enable rapid, quantitative, unbiased, and repeatable measurement and description of vocal dialects. Then, using this tool, I analyze the songs of lekking little hermits (Phaethornis longuemareus) to quantify dialectal variation in this species. Second, I examine the potential role of male-male competition in structuring the dialects described in the previous chapter. Specifically, I use an experimental playback procedure to test predictions of the hypothesis that males recruiting to leks may use vocal mimicry to deceive territory holders about their residency status (i.e. the deceptive mimicry hypothesis). Males responding to playbacks 1) showed reduced aggression to neighbors' songs than to strangers (i.e. they showed a "dear enemy" response), 2) did not appear to recognize individuals based on their songs, and 3) responded less quickly, but not less aggressively to unfamiliar "mimic" songs. Together, these results support the deceptive mimicry hypothesis, and provide evidence that dialects on little hermit leks may form through the widespread use of song mimicry. Third, I test three hypotheses explaining the role of female-choice in the formation of song dialects on hermit leks: females use dialects 1) to facilitate comparisons between males, 2) to assess dialect-level phenotypes, and 3) to reveal male dominance patterns. I also test a fourth hypothesis that females use song to re-locate preferred males (i.e. "hotshots") and lower quality males deceptively mimic the song of these preferred males to deceive mate faithful females into mating with the mimic. I found no support for the first three female choice hypotheses, but tentative support for the fourth. Females mated with different males within the same dialect at a rate greater than expected by chance, suggesting the possibility that females use song to re-locate males, and song sharing allows mimics the opportunity to intercept these females. Fourth, I describe a novel marking technique essential for the study of individual behavior in little hermits and other small hummingbirds.