Shadows Of The Cross: Barack Obama, Clerical Politics, And Gay Rights Compartmentalization In The Black Church 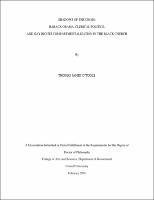 This dissertation evaluates the political decision-making process of black clergy around President Obama's gay rights agenda. Specifically, I use quantitative and qualitative techniques to determine how clergy shaped their public discourse in response to the liberalization of Obama's beliefs on gay rights throughout his presidency. My analysis finds that a range of cues, including sociodemographic, ideological, and contextual factors, drives the decision of clergy to speak out for or against Obama on gay rights. Furthermore, I find that clergy rely on compartmentalization and issue pivoting in order to balance overall support for Obama with repudiation of his gay rights agenda. Finally, I find that, contrary to conventional thinking on attitudes toward social regulatory issues, clergy exhibit a continuum of mainstream and radical beliefs on gay rights. These findings collectively suggest that the popular narrative of homophobia among black church leadership should be revised in favor of less monolithic treatments. iii