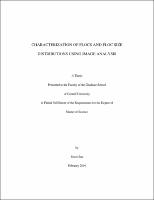 A nonintrusive digital imaging process was developed to study particle size distributions created through flocculation and sedimentation. This process was calibrated by measuring standardized polystyrene particles of known size and was utilized to count and measure individual kaolin clay particles as well as aggregates formed by coagulation with polyaluminum chloride and flocculation. Identification of out-of focus flocs was automated with LabVIEW and used to remove them from the database that was analyzed. The particle diameter of the test suspension of kaolinite clay was measured to be 7.7±3.8 [MICRO SIGN]m and a linear relationship was obtained between turbidity and the concentration of clay particles determined by imaging. The analysis technique was applied to characterize flocs and floc particle size distribution as a function of coagulant dose. Removal of flocs by sedimentation was characterized by imaging and the negative logarithm of the fraction of turbidity remaining after settling had a positive linear association with the logarithm of aluminum dose. The maximum floc size observed in the settled water was less than 120 [MICRO SIGN]m, which was in accordance with the value predicted by a terminal velocity model for the capture velocity of the experimental tube settler of 0.21 mm/s.