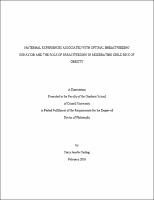 Background While clearly beneficial, some women do not engage in optimal breastfeeding practices. In addition, the impact of breastfeeding on early obesity development is unclear. The purpose of this research was to gain new insights regarding maternal barriers to exclusive breastfeeding behavior using an innovative mixed methods approach, and to investigate the impact of breastfeeding on infant-weight gain trajectories. Methods Longitudinal data from rural, central New York (N=595), spanning pregnancy through 2 years postpartum were used in this research. Data collection involved medical record audits and mailed survey questionnaires. Analytic methods included writing, coding and interpreting biographies built from survey data, building infant weight-gain trajectories using latent-class modeling techniques, and performing multivariate logistic regression procedures to assess odds of exclusively breastfeeding for 4 months and odds of membership in rising WFL z-score trajectories. Results Exclusive breastfeeding for 4 months was more likely to occur in women who were older, higher income, more flexible, more determined and driven, had more social support, lower early pregnancy BMI, and/or intended to exclusively breastfeed. ! The odds of exclusively breastfeeding for 4 months were higher in women who were older, less career-oriented, and intended to exclusively breastfeed. For less educated women, those with a lower external locus of control were more likely to exclusively breastfeed than those with a higher external locus of control. Children with a rising weight-gain trajectory were more likely to have mothers who were obese in early pregnancy, had a high school education or less, and smoked during pregnancy. In addition, children whose mothers exhibited at least two of these characteristics were more likely to have a rising weight-gain trajectory if they breastfed for less than 2 months when compared to children who breastfed for more than 4 months. Conclusions Breastfeeding occurs during a critical window of child development when infants may be more susceptible to the effects of maternal risk factors for child obesity. Understanding population-specific barriers to optimal breastfeeding behavior is critical, particularly in high-risk populations, for the development of appropriate interventions. Evidence shows longer breastfeeding duration may be protective against accelerated infant growth that increases the risk of future overweight and obesity. !