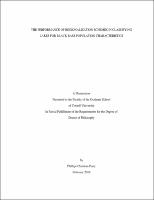 Regionalization schemes are delineations of land areas into discrete management units which are relatively homogenous at a specific scale. Multiple schemes have been published, each of which organizes the landscape based on specific sets of factors. Some frequently cited examples of regionalization schemes include ecoregions and watersheds. Multiple studies have examined the usefulness of regionalization schemes in organizing aspects of aquatic biotic structure including the nutrient levels, water chemistry, water quality, and macro-invertebrate assemblages of lakes and the benthic invertebrate, amphibian and fish assemblages in streams. While schemes have been shown to group waterbodies by species assemblage type, less common are studies which investigate the usefulness of schemes in organizing water bodies for demographic characteristics of a single species. There are, however numerous reasons to suspect that schemes might organize waterbodies for single species population characteristics. For example, individuals within water bodies positioned in the same region of a scheme are likely to experience similar environmental conditions such as precipitation, temperature, surrounding vegetation and urban development, pollution, soil characteristics and underlying geology and they might respond similarly to those shared influences. In this dissertation, I have sought to determine how useful regionalization schemes are in explaining among-region variance in four population characteristics (relative abundance, relative condition, juvenile growth, and adult growth) of the two black bass species (largemouth bass, Micropterus salmoides, and smallmouth bass, Micropterus dolomieu) in lakes across the State of New York. I first sought to determine which, if any, schemes were useful for which population metrics and then incorporated eleven different environmental covariates using mixed-effect multi-level models. I found that, depending on the bass metric, several schemes clustered lakes better than random chance alone. However, the lack of notable differences in bass metrics among regions provided a caution against using regionalization schemes as a primary lake management tool for black bass monitoring. I found that survey year and elevation were consistently important factors contributing to the partitioning of variance in black bass population characteristics. Finally, I identified a method for improving the accuracy of partitioning variance in bass metrics across a finite population of regions.