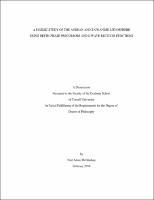 Identification of depth phase precursors has allowed the illumination of the lithospheric structure of the Andes. Such precursors are here interpreted as being underside reflections from the Lithosphere Asthenosphere Boundary (LAB), the Moho and intracrustal fluids. The Cal-Tech/Terrascope array was utilized in recording teleseisms from large events underneath the Andes. These stations were utilized as an array for events stretching back to 1990. Significant use of the EarthScope transportable array was also done from 2005 onwards. EarthScope has allowed significant improvements to be made regarding the resolution and identification of these weak phases. Results show the Moho to be fairly deep whilst also displaying a high variability in terms of thickness. Similarly the LAB is identified as being deep, ranging from 140 to 190 km underneath the central Andes. The use of the transportable array has also allowed for relatively high resolution profiling of the Moho. This profiling indicates the Moho's reflectivity varies considerably across distances in the range of tens of kilometers. The identification of the crustal structure is important as it allows for the verification or refutation of postulated geodynamic processes - specifically lithospheric delamination. Additionally, receiver function analysis has been performed to elucidate the lithospheric structure of Taiwan. Evidence for the presence of both the Eurasian Plate and the Philippine Sea Plate is observed, documenting the complex 3-d interactions impacting this tectonic boundary. This result, while preliminary, reveal the location of a tear within the EUP and help identify of the predominant geo-evolutionary processes at the margin.