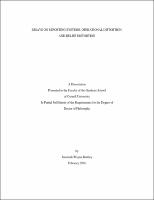 This dissertation is a combination of three relatively independent sole-authored papers. The first presents evidence that individuals distort their behaviors and their beliefs in response to performance systems that focus on objective measures of performance. They distort their behaviors and beliefs less when they are allowed to provide unverifiable narrative reports of their performance. I also provide evidence that the reason that they distort their beliefs is to make their beliefs be consistent with their distorted actions. The second essay presents evidence that unselfish, pro-firm actions lead to subsequent operational distortion (i.e. making operational decisions intended to increase a measure of performance rather than the underlying performance that the measure is intended to capture). I also present evidence that these pro-firm actions lead to more operational distortion if the operational distortion occurs in the same division of the firm as the initial pro-firm actions. Both of these essays present the results of experiments using Amazon Mechanical Turk (AMT) workers as participants. My final essay discusses four challenges that arise when conducting research with AMT and how researchers can deal with these challenges.