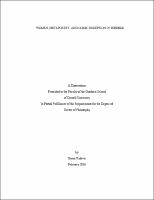 The focus of this study is self-reflexivity as a key to understanding Terence's dramaturgy and the poetics professed in his prologues. Building upon recent scholarship, I approach Terence's prologues not as biographical accounts but as fictional compositions with programmatic function. I explore the parallels between the prologues and the plots of his plays, interpreting the plots as metapoetic commentaries on playwriting as described in the prologues. Specifically, I argue that female characters in Terence's Eunuchus (Chapters 2-5) and Self-Tormentor (6-7) are metaphors for the plays and vice versa. Pursuing the analogy of women and poetry is rewarding for several reasons. The position of women and control over them are of fundamental importance in Menander and Roman comedy. Woman as a metapoetic trope, abundantly attested in ancient literature, especially comedy, highlights the commodification of texts and articulates the poets' anxiety of ownership and availability of their work. The same concern emerges from Terence's prologues, mapping onto the themes of sexual exclusivity and anxiety about emotional reciprocity in the plays. Central to Terence's program is self-positioning vis-à-vis other poets. I first consider a possibly unique case of the woman-as-play trope in Plautus' (most likely) last play, the Casina, proposing that he playfully commodified his "swan's song" by imagining its revival (Chapter 1). In Chapter 2 I turn to Terence and interpret the Eunuchus prologue as "open-market" poetics, enacted in the play as sharing a meretrix (Ch. 3). An indication that the poetics are disingenuous is the emphasis on "privileged material:" the violation of a citizen virgin (Ch. 4), framed in temporal paradoxes of initiative and imitation (Ch. 5), which ultimately secures Terence's poetic superiority by positioning the Eunuchus as a prehistory of the genre. The key to the Self-Tormentor poetics is performative ("ontological") duplicity, between what is staged and what should be inferred (Ch. 6). This is manifested in the play through the character of Antiphila, designed to challenge the possibility of verifying a woman's emotions by appearance (Ch. 7). The last chapter analyzes how Menander and Plautus encoded the anxiety about female sincerity as deceptiveness, and especially duplicity, of performance.