The Evolutionary Ecology Of Elevational Specialization In Tropical Montane Birds 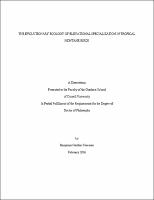 Tropical mountains are the most biodiverse terrestrial systems on Earth. This "megadiversity" is largely because tropical montane species inhabit narrow elevational distributions-understanding why tropical mountains are so biodiverse thus requires understanding the factors that explain elevational specialization. In my dissertation, I explored the role of two factors previously hypothesized to explain why tropical birds inhabit narrow elevational zones-temperature and interspecific competition. In Chapter 1, I describe resurveys of New Guinean montane bird communities originally surveyed by Jared Diamond in the 1960s, and demonstrate rapid warming-associated upslope shifts in these avifaunas. In Chapter 2, I test the hypothesis that these recent upslope shifts are the result of thermal specialization in New Guinean montane birds. However, I find no evidence that species' exhibit local adaptation to ambient temperature in their thermal physiology (lower critical temperatures and thermal conductances), suggesting New Guinean montane birds' elevational limits are minimally influenced by thermal specialization. I then use a comparative approach in Chapter 3 to test whether species exhibit local adaptation to cold high elevation environments in body size, and find little evidence that body size clines are positively linked to elevation in both intraspecific and interspecific analyses. These analyses suggest that temperature may primarily exert an indirect influence on tropical birds' elevational distributions (e.g., by altering biotic interactions with prey, predators or competitors). One biotic interaction hypothesized to be important in tropical montane avifaunas is interspecific competition, which has been argued to explain why a common pattern is for closely related species to inhabit different elevational zones in a "layer cake" pattern. In Chapter 4, I find broad support for a model of community assembly wherein competitive interactions upon secondary contact drive elevational divergence between sister species of tropical montane birds. I move from evolutionary pattern to ecological process in Chapter 5, where I test the hypothesis that interference competition is a mechanism limiting species' elevational distributions. Playback experiments in five species-pairs of New Guinean songbirds with "layer cake" patterns revealed strong interspecific aggression in all cases where species-pairs interact with their putative competitors, providing experimental data consistent with the hypothesis that interspecific competition is a factor limiting these species' elevational distributions.