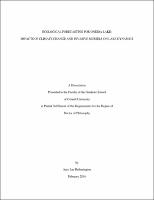 Climate change and invasive mussels impact the dynamics of lakes. Scientific understanding of the consequences of these anthropogenic changes is critical for management of these important resources. The goal was to understand the interactive effects of climate change and invasive mussels on the physical, chemical, and biological components of Oneida Lake and assess integration of science and management to mitigate impacts. Experiments, field monitoring, laboratory analysis, long-term dataset analyses, surveys, and content analysis were used. Oneida Lake is a shallow, polymictic 207 km2 lake located in Central New York. Experiments indicated clearance rates were similar for zebra and quagga mussels peaking at 18°C for zebra mussels and 20°C for quagga mussels. Zebra mussel clearance rates exceeded those of quagga mussels at most temperatures. In Oneida Lake, zebra mussel density and biomass decreased from 1992-2013; however, quagga mussel density and biomass increased from 2008-2013. Total average mussel biomass from 1992-2013 has not changed indicating a possible maximum biomass of 20 g/m2 AFDW for dreissenids in the lake. Average mussel filtration declined from the zebra mussel phase of 1992-2007 to the quagga mussel phase of 2009-2013 due to lower filtration for quagga mussels. Cumulative impacts of dreissenids coupled with reduced phosphorus loading from the Clean Water Act of 1972 likely influenced the Oneida Lake ecosystem by decreasing phytoplankton, zooplankton, Daphnia, and chl-a, and increasing Secchi depth from 1975-2013. Invasive mussels and climate change will continue to alter the Oneida Lake ecosystem likely further decreasing lakewide filtration. Integration of science and management is critical for mitigating impacts of climate change and invasive mussels. Twenty-five percent of scientists surveyed were unaware of invasive mussel management strategies for waterbodies studied. Aquatic invasive species management plans written in English exist in three countries with strategies in all but three US states. The majority of the management plans listed the six core elements of invasive species management, but there was disparity in details on accomplishing each core element. Reconnection of science and management through creation of a global information management system, collaborative framework for connecting people, science, and management, and sustained funding are essential for protecting valuable aquatic resources worldwide from invasive species and other anthropogenic stressors.