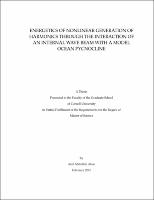 The internal wave beam are generated by the interaction of the barotropic tides with topography [58]. The beams propagate from lower layer of the ocean to the pycnocline and interacts with it, generating harmonics. The interaction includes two significant physical processes which may cause or contribute to the harmonics generation. One of those processes is the internal wave beam overlap between the incident wave beam and the reflecting wave beam. The other physical process is the wave refraction caused by the stratification in the BV frequency which is the buoyancy frequency. In this study, 2-D direct numerical simulation (DNS) has been performed to simulate harmonics generation. The spectral multidomain penalty method is used as the numerical method. This has allowed us to obtain higher resolution and higher accuracy results inside the pycnocline by ranging the subdomain height in the vertical direction. As a result of DNS, the perturbation pressure field p and the velocity field u are obtained. This raw data is postprocessed to analyze the total energy transferred to the harmonics. The result of the postprocessing shows that there is a peak of energy transmission in harmonics for the non-dimensional pycnocline thickness h/[lamda] x = 0.1 where h is the pycnocline thickness and [lamda] x is the wavelength of the primary frequency wave in x direction, in terms of the non-dimensional pycnocline strength r = Nmax /N1 which is the ratio of the maximum BV frequency inside the pycnocline to the lower layer BV frequency. In total, It is tested on five different r = 2, 4, 6, 8, 10 values for two different Reynolds numbers Re = 530, 5300. First, it was analyzed for Re = 530 and the results showed that the energy transmission is largely impacted by the viscous loss. To reduce the effect of the viscous dissipation, the Reynolds number is increased by the factor of 10 and the same analysis is performed again. To clarify the understanding of the simulation results even further, an analytical model for the viscous loss is derived. The model relates the viscous loss to the BV profile and it helps to observe why the transmission peak occurs. Additionally, the nonlinear interaction is analytically modelled which shows the generation is mainly caused by the incident and the reflecting internal wave beam interation.