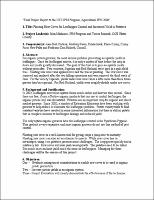 For organic potato growers, the most serious problem preventing acceptable yields is leafhopper. Once the leafhopper arrives, it is only a matter of time before the crop is down and yields greatly decreased. The goal of this trial is to gain acceptable yields without pesticides. Two varieties, Superior and Red Norland, were used in a split-field trial. Floating row cover was applied over half the trial at planting. The row cover was removed and replaced after the two hilling operations and was removed the third week of June. For the variety Superior , yields under row cover were a little more than three times greater than bare ground. For Red Norland, yields were roughly double under row cover.