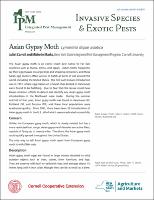 The Asian gypsy moth is an exotic insect pest native to Far East countries such as Russia, China, and Japan. Adult moths frequently lay their egg masses on cargo ships and shipping containers, and these hardy egg clusters often survive to hatch at ports of call around the world, including the United States. The first such known introduction was in 1991, where egg masses on a Soviet ship docked in Vancouver were found to be hatching. Due to fear that the larvae could have blown onshore, efforts to detect and identify any Asian gypsy moth introductions in the Northwest were made. During the summer and fall of that year, Asian gypsy moth was found in Vancouver BC, Portland OR, and Tacoma WA, and these local populations were eradicated quickly. Since 1991, there have been 20 introductions of Asian gypsy moth in the U.S., all of which were eradicated successfully.