Managing Mugwort In Field Nurseries With Cultivation And Herbicides 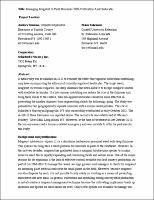 A field study was established in 2012 to evaluate the effect that vigorous cultivation (rototilling) may have on improving the efficacy of currently registered herbicides. The target weed, mugwort (Artemisia vulgaris), has deep rhizomes that often allow it to escape complete control with available herbicides. If a late summer rototilling can reduce the size of the rhizomes and bring them closer to the surface, then fall-applied herbicides should be more effective in preventing the smaller rhizomes from regenerating shoots the following spring. The study was planned for two geographically separate nurseries with a similar weed problem. The site at Schichtel's Nursery in Springville, NY was successfully established in early October 2012. The results of those treatments are reported below. The second site was established at Warren’s Nursery, Water Mill, Long Island, NY. However, at the time of treatment in late October 2012, the nursery owner had a business-related emergency and was not able to offer the plot area for this study.