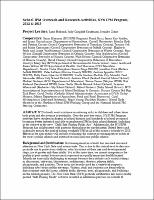 NYS schools need assistance in reducing risks to children and others from both pests and the overuse of pesticides. Over the past two years, NYS IPM Program activities have resulted in dozens of school districts and hundreds of school personnel becoming better informed and able to implement IPM in their school districts. Including in the context of the new “Child Safe Playing Fields Act.” Additionally, the NYS IPM Program has collaborated with partners throughout the northeastern United States and nationally toward the goal of having verifiable IPM in all of the nation’s schools by 2015. Efforts in the near future will include evaluating the current pest management needs of the state’s public schools and outreach to rural and non-public schools.