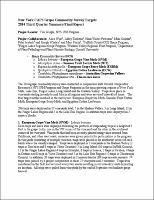 The 2014 grape commodity survey was conducted in conjunction with Cornell Cooperative Extension's NYS IPM Program and Grape Programs in the main growing regions of New York State; Lake Erie, Finger Lakes, Long Island and the Hudson Valley.  Traps were place in vineyards starting in early to mid July in all regions and were serviced biweekly 6 times.   The four target moths involved in the survey are: European Grapevine Moth, Summer Fruit Tortrix Moth, European Grape Berry Moth, and Egyptian Cotton Leafworm. 296 traps were deployed in 27 vineyards total; 5 in the Hudson Valley, 5 in Long Island, 12 in the Finger Lakes Region and 5 in the Lake Erie Region. In addition traps were deployed in 2 nursery blocks