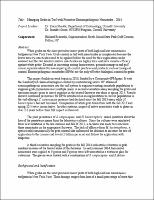 White grubs are the most prevalent insect pests of both high and low maintenance turfgrass in New York State. Grub control in turf with insecticides is complicated because the lower toxicity insecticides need to be applied before the need for their application can be assessed and the two labeled curative insecticides are highly toxic and have variable efficacy against white grubs. Demand is increasing among homeowners, grounds managers and golf course superintendents for low-impact grub control practices and products, such as biological control. Entomopathogenic nematodes (EPNs) are the only effective biological control for grubs. This project builds on work begun in 2013, funded by a Community IPM grant. It tests the feasibility of classical biological control by reintroducing native NY strains of entomopathogenic nematodes into the turf system to augment existing nematode populations to suppress grub populations over multiple years. A second evaluation assay sampling for grubs and treatment impact prior to insect pupation in the treated fairways was done in spring 2014. Results showed continued persistence for EPNs introduced as an augmentation to current populations in the turf although S. carpocapsae presence had declined since the fall 2013 assay while H. bacteriophora had not increased. Comparison of white grub totals from both the fall 2013 and spring 2014 were inconclusive. In other systems, impact of native nematodes tends to phase in over 2-3 years before their full impact is observed. The poor persistence of S. carpocapsae and H. bacteriophora raised questions about the loss of the persistence genes from the laboratory cultures. Since the cultures were reinitiated from new isolations in the late summer and fall of 2013, a decision was made to reinoculate those nematodes on the appropriate fairways. The lack of efficacy from H. bacteriophora , a species sold commercially for grub control also influenced the decision to increase the rate of application to the commercial levels (1 billion per acre) and follow the application with irrigation. A third evaluation sampling for grubs in the fall 2014 indicated a reduction in grub numbers in some of the treated sides of the fairways. In early summer 2014, biocontrol nematodes were applied to 9 greens and 9 greens were left untreated as a treatment plan for cutworms. The greens were treated with a combination of S. carpocapsae and S. feltiae.