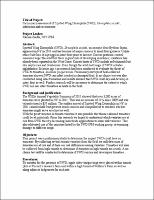 Spotted Wing Drosophila (SWD), Drosophila suzukii, an invasive fruit fly from Japan, appeared in NY in 2011 and has become of major concern to small fruit growers. Unlike other fruit flies, it lays eggs in intact fruit prior to harvest. Current pesticide control measures target the adult but there is great risk of developing resistance; resistance has already been reported on the West Coast. Known hosts of SWD include soft skinned fruit like raspberries and blueberries. Even though the wild host range of SWD includes nightshades (Solanum spp.) no research had been conducted to evaluate the threat of SWD to tomatoes, Solanum lycopersicum. Preliminary surveys of field-collected tomatoes showed SWD can infest cracked or damaged fruit. A no-choice test was also conducted using intact tomatoes and results showed that SWD could lay and develop in intact fruit as well. Further research will be necessary to determine the extent to which SWD can use intact tomatoes as hosts in the field.