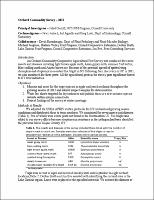 An Orchard Commodity Cooperative Agricultural Pest Survey was conducted for exotic insects and diseases including light brown apple moth (LBAM), Asian gypsy moth (AGM), summer fruit tortrix (SFT), false codling moth (FCM) and Asiatic brown rot (ABR). Because of the potential spread of spotted wing drosophila and streptomycin-resistant fire blight in NY following their discovery in NY in 2011, we also monitored for these pests. All the agricultural pests in the survey pose significant threats to NY fruit industries. In some orchard sites there were few to no peach or apple fruit because of blossom damage from the late spring freezes and, therefore, few brown rot samples were collected for analysis. No quarantine pests, AGM, FCM, LBAM, SFT, or ABR, were uncovered by the survey. However, 147 samples are pending molecular analysis for AGM and results should be available in January 2013. We did verify additional locations in which spotted wing drosophila and streptomycin-resistant fire blight occur in NY. Spotted wing drosophila was first detected in late June/early July in low numbers in the peach orchards. Over the course of the growing season and into the fall, this invasive insect was found everywhere we deployed traps, as well as by Cornell Cooperative Extension personnel across New York State. Populations exploded in in mid-August and subsided in late September. Estimates place crop loss in fall raspberries at 80% and in blueberries at 30%. A distribution map was updated routinely and made available online by Mike Fargione at Spotted Wing Drosophila Monitoring Efforts in New York State. We also posted findings on the Cornell Fruit Resources fruit blog in an effort to keep people informed of the outbreak of this introduced, invasive species. Streptomycin-Resistant Fire Blight was found by this survey in three new locations in NY, all in the Lake Ontario region. A webpage in the NYS IPM Program website, Invasive Species & Exotic Pests, was created to house the eight new fact sheets and their webpages that were written for the seven insects and one disease in the Orchard and Grape Commodity Surveys. Carroll presented five talks related to and about the Orchard Commodity Survey.