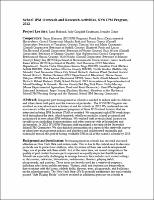 Integrated pest management in schools is needed to reduce risks to children and others from both pests and the overuse of pesticides. The NYS IPM Program was involved in several outreach activities at and for schools in 2012. We continued on-site assessments of the pest management programs of three NYS school districts that are interested in being IPM Institute STAR re-certified. We organized eight IPM workshops, held throughout the state, which targeted, wholly or partially, school personnel and participated in two school IPM webinars. We worked with several school districts on specific issues including demonstrations and other projects with yellowjackets and cockroaches. In 2012, NYS IPM Program staff organized a meeting of the Statewide School IPM Committee. We also finished preparation of a repeat of the statewide survey of school pest management policies and practices and collaborated regionally and nationally toward the goal of having verifiable IPM in all of the nation’s schools by 2015.