Developing farmers' skills and confidence in the use of Trichogramma ostriniae for European corn borer control in sweet corn, peppers and potatoes 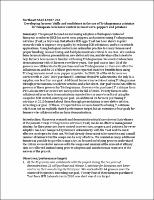 This project focused on increasing adoption of biological control of European corn borer (ECB) in sweet corn, peppers, and potatoes using Trichogramma ostriniae (T.ost), a tiny wasp that attacks ECB eggs. T.ost has been shown in prior research trials to improve crop quality by reducing ECB infestation, and/or insecticide applications.  Using biological control is an unfamiliar practice for many farmers and proper handling, release timing, and field placement are critical to success.  We used on-farm demonstrations, presentations, newsletter articles, and developed fact sheets to help farmers become more familiar with using Trichogramma. We conducted on-farm demonstrations with 44 farmers over three years.  Our goal was to have 25 of the growers we collaborated with purchase and use Trichogramma on their own after the collaboration, and for 20 of those growers to report at least two benefits from using Trichogramma in sweet corn, pepper or potato.  In 2010, 24 of the 44 farmers we worked with in 2007-2009 purchased T. ostriniae from IPM Laboratories, the only U. S. supplier, one less than our goal.  Additional farmers learned about using Trichogramma through presentations, newsletter articles, and a fact sheet.  Our goal was to have fifteen growers of these growers try Trichogramma.  Growers who purchased T. ostriniae from IPM Labs in 2009 or 2010 were surveyed in the fall of 2010.  Twenty farmers who collaborated in on-farm demonstrations reported two or more benefits of using the wasps for ECB control, meeting our goal.  An additional 24 farmers purchasing T. ostriniae in 2010 learned about them through presentations or newsletter articles, exceeding our goal.  Of these, 17 reported two or more benefits of using T. ostriniae, which was not an explicitly stated performance target, but an extension of our goals for farmers who collaborated in on-farm demonstrations.