A History of PEO [Planners for Equal Opportunity] 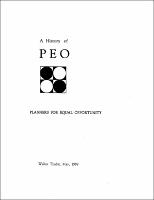 Walter Thabit was a city planner and community activist in New York City who pioneered the practice of "advocacy planning." This became part of professional practice after the 1960s, when began the long-term effort resulting in the Alternative Plan for Cooper Square that his obituary said "made existing residents the beneficiaries of urban renewal." The plan, involving staged construction to minimize disruption, called for 65 percent of new housing to be for low- and moderate-income residents. In 1964, Thabit was a founder of Planners for Equal Opportunity, which had 600 members from across the country and was active throughout the rest of the decade. While PEO lost momentum subsequently, Chester Hartman, another of its founding members, was able to use its mailing list and contacts to establish Planners Network, which continued in the advocacy tradition. Thabit wrote "A History of PEO" when he donated his papers to the Rare and Manuscript Collections Division of Cornell University Library. The finding aid for the collection is accessed online at http://rmc.library.cornell.edu/EAD/htmldocs/RMM04215.html.