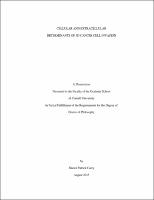 Breast cancer metastasis is a stepwise process during which cells dissociate from the primary tumor and migrate through extracellular matrix (ECM) and tissue barriers to spread to secondary sites. Metastasis is initiated when tumor cells acquire a motile phenotype and invade into the stromal ECM surrounding the tumor, which is heterogeneous and contains three-dimensional (3D) structural features including a diversity of fiber and pore microarchitectures, varying degrees of matrix alignment, and track-like structures. Notably, it is largely unknown whether, or how, these physical cues integrate with intracellular signaling to affect the behavior of invading cells. Furthermore, intratumor heterogeneity and cellular plasticity result in diverse and evolving invasive phenotypes whose molecular mechanisms are not well understood. Thus, despite the clinical importance of understanding and identifying invasive progression, the cellular and extracellular determinants that enable the invasive cancer cell phenotype remain unclear. Here, we study the process of 3D cancer cell migration within biologically inspired in vitro models that mimic key aspects of the in vivo interstitial stroma and demonstrate that the structure of a cell‟s local ECM regulates its invasive behavior. We show that 3D ECM microarchitecture controls the acquisition of cell motility by directing subcellular protrusion dynamics. By inducing adhesion signaling-dependent anisotropy of these cellular morphodynamics, aligned matrix guides and accelerates 3D cell spreading and migration. Furthermore, we find that physiological ECM-free microtracks provide additional pro-invasive cues that substantially reduce the mechanistic burden of 3D cell migration. We further observe in an in vitro model of intratumor heterogeneity that malignant "leader" cells create invasion-enabling microtracks within 3D ECM that can induce invasion of otherwise non-invasive "follower" cells. Through further studies, we determine that invasive fitness, which can be heterogeneous across a cell population, is an intrinsic and heritable cell trait. We exploit this finding to establish invasive and non-invasive cancer cell subpopulations, which we subsequently use to identify characteristic molecular and phenotypic attributes of invasive and non-invasive cells. Finally, we explore a potential consequence of "follow-the-leader" invasion and demonstrate that exposure to a stroma-like collagen-rich microenvironment induces mesenchymal gene expression and an invasive phenotype in non-invasive, nontransformed mammary epithelial cells. Together, our findings demonstrate that invasiveness is coordinately determined by a cell‟s intrinsic 3D migration propensity as well as its local 3D extracellular matrix, both of which can be heterogeneous across a given tumor-stroma microenvironment. Despite the inevitable complexity that arises from this heterogeneity, these findings contribute to our understanding of invasion-enabling extracellular features as well as the context-dependent molecular mechanisms by which cells to respond to such features during 3D cancer cell invasion.