Dynamic Coupling And Chemical Transport Between The Stratosphere And The Troposphere 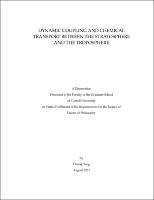 Although the stratosphere and troposphere are separately different in many aspects (thermal structure, dynamic circulation, chemical composition and etc.), studies in recent decades have indicated a much stronger connection between these two distinct layers. Dynamically, the stratospheric circulation is driven by the eddies that are dominantly generated in the troposphere, whereas the troospheric circulation varies, in some ocassion, mostly due to the circulation and eddy perturbation originated in the stratosphere. The exchange and transport between the two layers, on the other hand, tend to alter the chemical compostion on both sides, and hence induce subsequent influences on the chemistry and radiation within the two layers. In this study, we further enrich the understanding on the connection between the stratosphere and troposphere by examining their dynamic coupling and chemical exchange. We first investigate the dynamic impact from the troposphere to the stratosphere by examining the role of tropical sea surface temperature (SST). By designing several idealized SST forcing simulations in an aqua-planet model, we find that the zonal distribution of SST perturbations has a major impact on the vertical and meridional structure of the BDC as compared with other SST characteristics. Zonally localized SST heatings tend to generate a shallow acceleration of the stratospheric residual circulation, whereas SST heatings with a zonally symmetric structure tend to produce a deep strengthening of the stratospheric residual circulation. The shallow versus deep strengthening of the stratospheric residual circulation change has been linked to wave propagation and dissipation in the subtropical lower stratosphere rather than wave generation in the troposphere. The dynamic impact from the stratosphere to the troposphere is then discussed by focusing on the downward influence of polar stratospheric ozone depletion. Three possible mechanisms are examined in an idealized dry model: the polar stratospheric cooling impacts tropospheric synoptic eddies via (a) the direct influences on the lower stratospheric synoptic eddies, (b) the planetary wave-induced residual circulation, and (c) the planetary eddy - synoptic eddy nonlinear interaction. It is argued that the planetary wave-induced residual circulation is not the dominant mechanism, and that the planetary eddies and further nonlinear interaction with synoptic eddies are more likely the key to the downward influence of the ozone depletion-like cooling. Last, the chemical interaction between the stratosphere and troposphere is explored by quantifying the stratosphere-troposphere exchange (STE) of ozone. The specified dynamics (SD) version of the Whole Atmosphere Community Climate Model (WACCM) is used to estimate the ozone STE along different isentropic surfaces (isentropic ozone STE herein). Net troposphere-to-stratosphere ozone STE is diagnosed in the subtropics (350 K - 380 K), while net stratosphereto-troposphere ozone STE is diagnosed in the extratropics (280 K - 350 K), with different magnitudes and seasonalities over different isentropic (meridional) regions. Potential vorticity (PV) sources induced by both differential diabatic heating and isentropic mixing contribute to the diagnosed isentropic ozone STE flux, but the latter is slightly larger. Moreover, results in the SD-WACCM are generally consistent with the analysis in a different model, the SD version of the Canadian Middle Atmosphere Model (CMAM), but the SD-CMAM diagnoses a smaller STE flux. This difference is associated with the different extent of isentropic mixing between the two models.