Initiating Mechanisms Of Aortic Valve Disease: A Role For The Endothelium 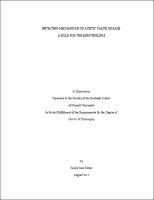 The objective of this thesis was to unveil initiating mechanisms of aortic valve disease, a serious and prevalent cardiovascular pathology affecting 2.8% of Americans over the age of 75. Currently, valve disease has no known causes and no existing treatments except for cardiothoracic surgery. Identification of initiating mechanisms will lead to new diagnostic markers and treatment strategies that would allow for early intervention and eventually the prevention of valve disease. This work primarily focuses on the influence of the inflammatory cytokine tumor necrosis factor-[alpha] (TNF[alpha]) on the endothelial cells that line the aortic valve. By focusing on inflammation and the endothelium, both "first responders" to disease conditions in the valve environment, we hoped to unveil new mechanisms that could govern early stages of the disease. In this thesis, we have demonstrated that TNF[alpha] causes adult valve endothelial cells to produce destructive free radicals, dysregulating the delicate oxidate stress state of the valve. TNF[alpha] also drives endothelial cells to become mesenchymal via NF[kappa]B signaling, a reactivation of an embryonic pathway important to shaping the valve leaflets in utero. We further found that NF[kappa]B signaling drives endothelial participation in the later stages of valve calcification, showing in vivo that NF[kappa]B is a critical mediator of valve dysfunction. We have also demonstrated a role for the stem cell transcription factor Oct4 in governing how valve endothelial cells change phenotype throughout disease. These findings have led to improved understanding of how NF[kappa]B and Oct4 govern interstitial cell calcification, in the later stages of valve disease. Finally, we have used the biomechanical engineering strengths of our lab to investigate how the regulation of valve interstitial cell contractility is crucial to progression of calcification in the valve. My hope is that the results presented in this thesis will create a basic science foundation for the development of diagnostics and therapies to help patients suffering from aortic valve disease, especially those ineligible for surgical amelioration. Our in vitro and in vivo findings regarding the role of inflammation in endothelial dysfunction provide new evidence for the design of drugs targeting the NF[kappa]B pathway for aortic valve disease.