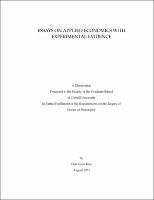 My dissertation consists of three chapters, each of which experimentally investigates the reasonings of an individual's suboptimal decisions from the perspective of self-interested rational agents. In the first chapter, I examine how the voluntary contribution of public goods is affected by uncertainty in the size of the relevant population. I show that when the number of players is random and each player knows only the population distribution, the voluntary contribution level in Nash equilibrium is higher than when the number of players is fixed at the mean of the population distribution if the marginal production of public goods is convex and the agents are self-interested. I also show that the voluntary contribution level decreases as the expected number of players increases, but such a decreasing tendency is weaker than predicted by the model for the case where there is no uncertainty in the size of the population. On the contrary, by modeling the agents' social preferences in the form of an increasing concave warm-glow utility in the population size, I show that the voluntary contribution level is smaller under population uncertainty when the production function is linear. The linear voluntary contributions mechanism (VCM) can capture the relationships between warm glow and population uncertainty, and the nonlinear VCM with population uncertainty can provide a structural way to additionally examine theoretical predictions. The results of the lab experiments support many aspects of the theoretical predictions. As the mean population size increased, the changes in contribution level were smaller under population uncertainty, and the subjects' decisions were determined mainly by the lower bound of the population distribution. When the population distribution was more volatile, subjects contributed more. It is a new and interesting observation that the salience of population uncertainty partly drove out warm glow. In the second chapter, I show that winner-take-all competitions can lead to the person in the second (middle-tier) environment having the worst expected payoff when players exclusively choose their environment and exert effort before their random, heterogeneous environmental supports are realized. The tiers are defined by the ranks in pairwise competitions. The second-tier trap (STT) is a situation in which a player from the second-tier environment has the worst expected payoff even though his expected environmental support is strictly greater than that of the third-tier player. A sufficient condition for the STT is that the ex-ante advantages, the winning probabilities when all the players exert the same amount of effort regardless of their environment, be the same for those two environments. I claim that this sufficient condition for the STT is so weak that players can easily be tempted to choose the second-tier environment, which is the wrong decision. Lab experiments verify this claim. In twostage all-pay auction games whose structure leads to the STT, subjects chose an environment and then an effort level. In four rounds (called the unrestricted rounds) they chose one of three environments, and in six rounds (the restricted rounds) they were not allowed to choose the first-tier environment. No subject chose the optimal environment in all the restricted rounds, while 52.27% of subjects did so in all the unrestricted rounds. On average, subjects chose the optimal environment in 28.67% of all the restricted rounds and in 75.57% of all the unrestricted rounds. Those who chose the optimal environment in all the unrestricted rounds were more likely to fall into the STT. In the last chapter, I report the results from a natural field experiment about charitable giving. I asked a cooperative charity whose headquarters is located in Seoul, South Korea, to send 16,000 solicitation letters of four different types, with each having a different attachment, in order to better understand the philanthropy initiatives and individuals' social preferences by collecting responses and comparing them by letter type. They received only one donation and 381 'active' returns in eight weeks. The real coin attachment, though some charities including UNICEF have used this 'coin strategy,' did not bring a significantly positive effect. A sense of involuntarily indebtedness by itself does not seem to be one of the major driving forces behind reciprocity. The coin attachment confirms that potential donors have inequity aversion: A significantly larger proportion of mail recipients returned the letter with 100 Korean won than those with no attachment. I also claim that the results from the previous studies should be extrapolated to a general situation with extra care due to the sample selection bias.