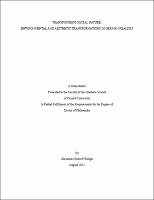 TRANSFIGURING SOCIAL NATURE: ENVIRONMENTAL AND AESTHETIC TRANSFORMATIONS IN GERMAN REALISM Alexander Robert Phillips, Ph.D. This dissertation investigates the relation between post-1848 German realist aesthetics and the representation of nature as physically reconstituted by the human labor process. Environmental transformation in the form of cultivation, pollution, and sprawl would appear to pose a challenge to a realist poetics invested in achieving artistic status through "transfiguration" (Verklärung), or the synthesis between material reality and poesy, inasmuch as the mimetic representation of ecological depredation carries with it a reassertion of both prosaic capitalist relations and the base material reality capitalism produces. This study asks how Adalbert Stifter, Wilhelm Raabe, and Theodor Fontane negotiate the mimetic and poetic imperatives of realism where their texts encounter environmental depredation. I argue that the environment's increasingly social character feeds into each author's poetic project, such that environmental transformation grounds a dynamic realism that binds political critique with a broader theoretical reflection on the conditions of possibility for poesy in modernity. The encounter between the social production of nature and poetic realism is crucial for Stifter, for whom the cultivation of the environment mirrors the task he assigns to realist narrative of making perceptible the general moral order that sustains the universe. These cultivated utopias are impossible for Wilhelm Raabe, for whom environmental depredation becomes an agent of generative destabilization that stymies the transfiguration gesture and catalyzes a critical reevaluation of the status of art in a degraded world. Finally I turn to Fontane's Stechlin to consider how the poetic character of Brandenburg is determined by an emerging Anthropocene reality. By looking at the relation between environmental depredation and art, "Transfiguring Social Nature" develops a line of ecocritical inquiry that moves beyond the focus of much earlier ecocritical scholarship on nature and place to account for the poetically constitutive aspects of environmental transformation while also considering its deleterious effects. At the same time considering environmental issues as integral to the texts' otherwise social framework allows us to see realism both as a dynamic literary and theoretical discourse that also figures within the genealogy of contemporary environmentalism.