Experimental And Analytical Investigations Of Solitary Waves On A Beach 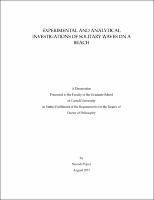 This thesis presents theoretical and experimental investigations of the flow on a beach, i.e., the swash, due to solitary waves with the objective of understanding the flow processes that govern complex coastal hydrodynamics. The bed shear stress is identified as an important quantity and consequently, a shear plate sensor is developed to make accurate measurements of the bed shear stress. Its size is designed to be small enough to give spatially local measurements and its bandwidth high enough to resolve time-varying forcing due to waves. Typically, shear plate sensors are restricted to zero pressure gradient flows because secondary forces on the edge of the shear plate caused by pressure gradients can introduce large errors. To address this issue, a theory is developed to analyze the pressure distribution at the edges of the shear plate and a new methodology is introduced for correcting for the pressure gradient force. Experimental results are presented that show that this methodology improves the accuracy of the sensor. The swash flow created by solitary waves beyond the stillwater shoreline on a plane, impermeable beach is studied. Measurements of the bed shear stress, flow velocities, water depths, bed pressure and shoreline motion are presented for a wide range of incident solitary waves that span different regimes of wave breaking. The flow evolution due to breaking solitary waves is found to be a gravity-driven flow that is scaled by the initial velocity of the shoreline, which, in turn, is shown to be predicted by measurements of wave height near the stillwater shoreline. Experimental results are presented that show how different wave breaking regimes influence the initial shoreline velocity, the swash flow evolution, the run-up and the time period of the swash. Time-histories of the bed shear stress are also presented, but a new normalization for the peak values of the bed shear stress using the initial shoreline velocity shows the crossshore variation of bed shear stress and the influence of different wave breaking regimes. The effects of bed friction are found to significantly alter the flow in the leading edge of the swash, near the moving shoreline. A theory is developed that considers the leading order dynamical balance in the swash tip, treating it in a bulk sense. Predictions of the shoreline motion from the theory compare very well to the measured shoreline motion. Experiments are also conducted to study the interaction between successive solitary waves incident on a beach. Two cases are examined: a strongly interacting case and a weakly interacting case. The parameters relevant to predicting the strength of interaction between the swash of successive solitary waves are given. Measurements of bed shear stress, bed pressure and velocity are also used to explain the complex boundary layer dynamics that occur in the interaction of the swash flows due to successive waves.