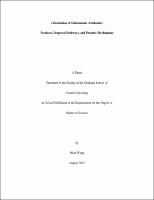 During drinking water treatment, micropollutants can react with free available chlorine (FAC) resulting in the formation of potentially toxic disinfection byproducts (DBPs). Sulfonamide antibiotics are a group of micropollutants commonly detected in drinking water resources and their occurrence pose threats to public health. Previous researchers have reported on structures of disinfection byproducts of sulfamethoxazole in reactions with FAC. However, relatively few products were found and little is known about products of reactions between other sulfonamide antibiotics and FAC. The objective of this research was to investigate three sulfonamide antibiotics to address the following questions: (1) what are the structures of the DBPs formed in the sulfonamide-FAC reaction?; (2) what are the likely oxidation reaction pathways?; and (3) what reaction mechanisms are common to the three sulfonamide antibiotics? The micropollutants were spiked individually into batch reactors infused with a range of FAC concentrations. Samples from the reactors were separated with HPLC and the residual sulfonamide antibiotic concentrations were measured with UV-VIS to observe products. To determine the products of the reaction, samples from same reactors were separated with HPLC and analyzed by quadrupole-orbitrap mass spectrometry. A non-target screening workflow was developed using the Sieve software and applied to analyze high-resolution mass spectrometry acquisitions for potential chlorination products. Structures were proposed for 16, 18, and 16 DBPs of sulfamethoxazole, sulfadimethoxine, and sulfathiazole, respectively. The structures are supported with both analytical data and a discussion of chlorine reaction mechanisms reported in the literature. Common reactions that were iii observed for all three sulfonamide antibiotics include N-chlorine substitution, hydrolysis initiated by S-N bond cleavage, hydrolysis initiated by S-C bond cleavage, hydroxylation, and SO2 extrusion. These observations are important in extrapolating this work to other sulfonamide antibiotics that have not yet been studied. iv