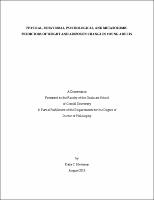 Background: Weight gain in young adults during the first year of college tends to track into later adulthood, contributing to risk for adult overweight/obesity. Identification of predictors of weight gain and adiposity change, considering population subgroup differences, could lead to effective prevention strategies. Methods: In the context of a prospective study design of college freshmen with repeated measures of anthropometry and adiposity (measured via dual energy x-ray absorptiometry), over one academic year, we evaluated multiple independent variables as potential predictors of weight gain and adiposity, testing for effect modification by sex. We also compared the metabolome between participants who increased in three markers of central adiposity over the year vs. those with stable adiposity. Results: 264 freshmen (50% female, characteristics representative of the Class of 2015) participated; 65% (N = 173) completed follow-up 8-9 months later, at the end of the academic year. Weight gain was ~ 2 kg overall; among the 75% who gained at least 0.5 kg over the year, weight increased 5.6%, on average. Leaner body habitus at the start of college (leaner adiposity and anthropometrics) was associated with greater weight gain and weight gain risk in regression analyses. We observed a significant sex x physical activity interaction (Pinteraction = 0.049) such that, higher baseline physical activity predicted greater weight gain among females. Investigation of psychological factors, including eating competence, restraint, and overeating due to emotional or external cues, as predictors of changes in adiposity and weight were generally null; however, there was a consistent and statistically significant stress x sex interaction such that greater stress at the start of college was significantly associated with increases in weight, waist circumference and BMI among males. Metabolomics investigation results showed baseline plasma concentrations of meso-erythritol and fructose, two dietary sweeteners, were respectively 15- and 2-fold greater among participants who subsequently experienced increased central adiposity, compared to participants who maintained a stable adiposity phenotype. Conclusions: Weight gain during the first year of university is common, and leaner body habitus at the beginning of college was associated with greater weight gain. There were meaningful sex differences in predictors of weight gain: higher self-reported baseline physical activity in females only and, higher self-reported baseline stress in males only, were both associated with greater weight gain. Higher frequency of dining hall use during the freshman year, and higher blood concentration of meso-erythritol were also significant predictors.