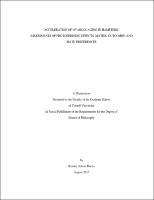 In mammals, female fertility declines with age due in part to a progressive loss of ovarian follicles. The ovarian toxicant 4-vinylcyclohexene diepoxide (VCD) accelerates follicle depletion and, therefore, fertility. In this dissertation VCD served as a valuable tool to investigate ovarian follicle depletion in three inter-related studies. Study 1: Seasonal ovarian quiescence is associated with physiological changes that decelerate reproductive aging and may influence susceptibility to the ovotoxic effects of VCD. To determine if VCD destroys follicles in reproductively quiescent Siberian hamsters (Phodopus sungorus), they were treated with VCD during short, winter-like day lengths. Follicle numbers and fertility were compared with reproductively active females that were treated in long day lengths. Follicle numbers were significantly reduced by VCD under both day lengths, and VCD-treated hamsters weaned substantially fewer offspring than controls. These outcomes did not differ by day length, and the results suggest that VCD destroys follicles of female hamsters in both their reproductively active and quiescent states. Study 2: Serum AMH correlates with ovarian follicle numbers and is often used to predict the outcome of assisted reproductive techniques. However, little is known about its predictive value for mating outcomes. VCD was used to assess the value of anti-Müllerian hormone (AMH) as a predictor of mating outcome in the context of reproductive aging. Prior to pairing experimental females with males, serum AMH was measured in 9-month-old Siberian hamsters, an age at which there are substantial declines in fertility and fecundity, prior to breeding. AMH was also measured in 5-month-old females treated with VCD. Vehicle-treated 5-month-old females served as controls. On average, both young and old hamsters that littered had higher AMH concentrations than females that did not. However, some females with relatively high AMH concentrations failed to litter, whereas several with low or even undetectable AMH succeeded. Many of the hamsters with low or undetectable AMH concentrations had been treated with VCD. These data suggest that mean AMH concentration might help to predict mating outcomes on a group level, but on an individual basis, a single AMH determination is less informative. Study 3: Young female Syrian hamsters (Mesocricetus auratus) generally prefer dominant over subordinate males as mating partners. A previous study indicated that old female Syrian hamsters have reduced preference for dominant males. To test the hypothesis that decreased reproductive quality due to ovarian aging reduces mate preference, reproductive and chronological age were decoupled by treating young female hamsters with VCD. VCD-treated and control females were allowed to choose between a dominant and a subordinate male in a Y maze on the day of proestrus. Both groups demonstrated preference for the dominant male by leaving a greater proportion of vaginal scent marks near him, and there was no effect of treatment. The results suggest that accelerated follicle depletion does not reduce mate preference in young female hamsters. Collectively, these results highlight the value of VCD as a tool in ovarian aging research. The compound was useful in determining that seasonal anestrus does not influence sensitivity of hamsters to VCD, that mean AMH predicts mating outcome on a group level, and that the size of the ovarian follicle reserve does not influence female mate choice in female hamsters.