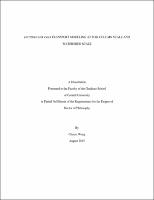 Understanding the transport of Escherichia coli at different scales is very important for water quality control and public health. Therefore, E. coli transport modeling was conducted at both soil column scale and watershed scale. At soil column scale, first, a small-scale rainfall experiment was conducted in which E. coli was mixed with a simple soil composed of sand (250-300 [MICRO SIGN]m) and clay with the mass ratio of 9:1. By applying Hairsine-Rose model and Gao model to the microbial transport simulation, the solute-particle duality of microbes was discovered: a solute that does not diffuse is essentially a particle and a particle that does not settle out of suspension is essentially a solute. Then, the co-transport of clay and E. coli was investigated by simulated rainfall over two sets of saturated soil columns infused with E. coli: one set of columns consisted of sand and the other consisted of a 9:1 sand-clay mixture. Based on a combination of empirical and modeling results it was concluded that any role clay particles play in facilitating bacteria transport is offset by its role in decreasing the penetration depth and the effectiveness of raindrop impact. At last, the conclusions from the soil column scale studies were applied to the understanding and prediction of E. coli concentration and loading in a stream, and it was found that the level of E. coli in a stream is driven by four independent processes-runoff and erosion, microbial activity, shallow subsurface flow, and groundwater, and the importance of the processes at Fall Creek Watershed decreases by the order.