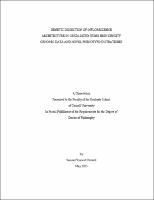 As the carriers of fruits and grains, inflorescences have been an important target of selection throughout domestication and modern breeding in many crop species. In Asian rice (Oryza sativa), one of the world's staple crops, the inflorescence is known as a panicle, due to complex lateral branching patterns. Rice breeders have had trouble measuring panicle phenotypes, limiting their ability to assess the importance of candidate genes from model systems in the context of natural variation and incorporate these findings into field-level crop improvement pipelines. This dissertation describes the development of a novel open-source phenotyping platform, PANorama, which uses skeletonization techniques to extract a range of length, width, and count phenotypes from images of rice panicles. High-resolution phenotyping of panicle traits complemented dense genetic marker data, increasing both the number and effect size of quantitative trait loci (QTL) that were detected for panicle traits within a recombinant inbred line mapping population. Comparisons among traits across a diverse panel of varieties grown in the field revealed that relationships between distinct components of panicle architecture are conserved across O. sativa, despite at least two origins of domestication. However, panicle traits showed distinct distributions within and between the rice subpopulations, suggesting that genetic variation has been partitioned during geographic and ecological radiation of the species. Genome-wide association (GWAS) revealed unique genetic architecture for different types of traits, and identified a large number of trait-specific, small-effect QTL associated with natural variation in panicle development, several of which are near known candidate genes. Finally, while panicle traits occasionally shared associations with traditional agronomic phenotypes and yield components, a large portion of inflorescence associations were located in unique regions of the genome, suggesting that relationships between panicle architecture and agronomic performance in rice are subtle and highly multi-genic. Taken together, these results provide a rich assessment of panicle development in Oryza sativa and establish a methodological framework for breeders interested in optimizing inflorescence architecture in the context of yield.