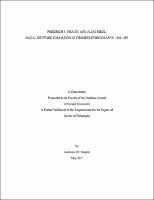 This project sets out to articulate the faint indicators of connectedness and relatedness between Alois Riegl (1858-1905) and Friedrich S. Krauss (1859-1938). Both were central to moments of intensified activity and institutional formation in 1883/84 and 1894/95, respectively the formation of the Ethnographische Commission within the Anthropologische Gesellschaft Wien (AGW) in 1883/84 and the mobilization in support of the Verein für österreichische Volkskunde (VöV) in 1894/95. Both entities responded to the crises of the Nationalities Problem in Austria, which included the rapid growth of modern anti-Semitism after 1880. Volkskunde in Germany was predominantly nostalgic, bourgeoise, and anti-modern, more like folklore studies than like cultural anthropology, under the influence of Wilhelm Heinrich Riehl. Austrian liberal Volkskunde followed the Enlightenment ideals of Alexander von Humboldt and his study of Volksgeist (spirit of the people), as articulation of the infinite, plastic variability of subjectivity. Moritz Lazarus and Chaim Steinthal advanced, in the period 1860-1890, Humboldt's proposition for a liberal Völkerpsychologie, (ethno-psychology) to normalize ethnic difference, including the legitimacy of the Jews as citizens of a civic rather than ethnic nation. Riegl's concept of Kunstwollen (artistic will) explored the plasticity of artistic production and apperception in a manner consistent with ethno-psychology's influence on nascent social psychology, sociology and ethnographic study, as in the work Lazarus's prominent Jewish students Franz Boas and Georg Simmel. The organization in Vienna of the Verein zur Abwehr des Antisemitismus (Society for Defense Against Anti-Semitism), known at the time as the anti-anti, ran up against the problem of blowback against overt opponents against anti-Semitism. On the other hand, the diverse advocates of Volkskunde or Ethnographie in Vienna, both universalist and particularist, e.g. Max Grunwald's Jüdische Volkskunde mobilized in 1896/97, articulated the diversity of Austrian ethnicities and sought to hold open the spaces of Jewish civic identity. Krauss was advanced in his exploration of an ethnography of the abject, traveling to the East to give aid to victims of pogroms. The networks of Riegl's Jewish connections suggest his Judeo-sympathetic advocacy, overlapping with the contrasting radicalism of Krauss's public sphere activities.