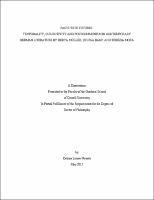 This dissertation analyzes future-oriented narrative features distinguishing German literature about European communism and its legacies. Set against landscapes marked by Soviet occupation and Ceauşescu's communist dictatorship in Romania (Müller) and against the 1956 Hungarian revolution, eastern European border openings, and post-Wende Berlin (Mora, Bánk), works by these transnational authors engage social legacies that other discourses relegate to an inert past after the historic rupture of 1989. Dominant scholarship reads this literature either through trauma theory or according to autobiography, privileging national histories and static cultural identities determined by the past. Shifting attention to complex temporal structures used to narrate literary subjectivities, I show how these works construct European futures that are neither subsumed into a homogeneous present, nor trapped in traumatic repetition, nostalgic longing, or psychic disavowal. My analysis extends and contributes to debates in politics and the arts about the status of utopia after communism and the role of society in political entities no longer divided in Cold War terms of East/West, three worlds, or discrete national cultures. By focusing on Müller, Mora and Bánk, I widen the purview of FRG-GDR discussions about communism to include transnational, temporal and narrative perspectives that scholarship on these authors often overlooks.