Population Genetics Of Phytophthora Infestans In The United States 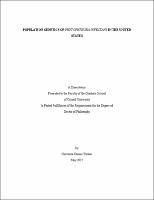 Late blight disease caused by Phytophthora infestans continues to pose a great challenge for potato and tomato growers around the world. Despite the numerous efforts conducted to alleviate the losses caused by this disease, the pathogen's diversity has been a key factor in disease control failures. Continuous monitoring of pathogen traits such as fungicide sensitivity and host preference are essential for selecting the best disease mitigation method. The overall objective of this study was to understand the P. infestans population in the USA. More specifically, my research objectives were: i) To characterize the phenotypes of the most recent and most prevalent strains of P. infestans in the US; ii) To investigate a set of rare and diverse genotypes detected in the northeastern US in 2010 and 2011; iii) To study the phenotypic diversity (mating type, host preference, sensitivity to mefenoxam, the effect of temperature on release of zoospores and the effect of temperature on mycelial growth) of a diverse panel of P. infestans from the US, Mexico and the Netherlands and determine the genetic relatedness among them; iv) To conducted a genome-wide association study to identify genetic markers associated with important phenotypic traits; and v) To investigate the characteristics of mefenoxam acquired resistance. Differences in mating type, mefenoxam sensitivity, pathogenicity on potato and tomato, and zoospore release at different temperatures were identified between the recent genotypes of P. infestans in the US (US-8, US-22, US-23, and US-24). The genetic characteristics of the rare and diverse genotypes detected in the northeastern US were consistent with a recombinant population. The phenotypic analyses conducted on strains from the US, Mexico and the Netherlands, revealed a broad range of phenotypic responses. Eleven association hits for mating type in P. infestans where found with a P < 1e-5. The phenomenon of acquired resistance was not unique to certain strains of P. infestans; originally sensitive genotypes US-22, US-23, and US-24 were all able to acquire resistance after a single transfer through mefenoxam containing media. Thirty-two genes were found to be significantly differentially expressed in response to mefenoxam in all originally sensitive genotypes studied.