Critical Parameters For The Production Of Safe Soybean Tempeh 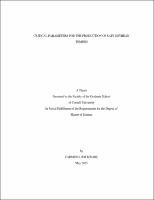 Acidification with lactic and acetic acid was used to test growth of B. cereus in soybean tempeh. The tempeh was made using two different molds as starter culture. Inoculation with Rhizopus oligosporus or R. oryzae in the soybeans acidified with lactic acid produced acceptable tempeh with B. cereus counts below 1 x 102 CFU g-1. Adding acetic acid produced tempeh of varying quality and did not inhibit bacterial growth. Additionally, bacterial counts in the tempeh acidified with acetic acid were significantly higher (P < 0.05) when the soybeans were inoculated with R. oryzae than when inoculated with R. oligosporus.