Compression After Impact Of Sandwich Composite Panels With Thick Facesheets 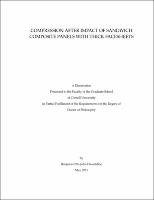 Despite the numerous advantages that sandwich composites offer in transport structures over traditional metallic structures, they remain highly susceptible to low-energy impact damage, resulting in a significant reduction in compressive strength. To this end, an experimental and computational study of damage tolerance following quasi-static indentation (QSI) at the barely-visible indentation threshold was performed. Sandwich composite panels consisted of 16-ply carbon-epoxy facesheets bonded to an aluminum honeycomb core. A parametric study was undertaken to study the effect of facesheet layup, and core geometry. This was correlated with the indentation damage and compression strength and failure mode following indentation. Two spherical indenters were used to study the effect of indenter geometry. Experimental compressionafter-impact (CAI) strength was compared to the undamaged strength obtained from edgewise-compression tests of specimens with the same geometry type. Three distinct failure modes were observed in the CAI experiments: compressive fiber failure, delamination buckling and global instability. Post-indentation compressive strength was independent of indenter size and there was no clear propensity for a particular failure mode dependent on a given specimen geometry. Specimens with a high core density and facesheets with a primary ply angle change of 90? were found to be the most damage resistant. Specimens with facesheets having the outer 0? plies closest to the center of the laminate were found to be the most damage tolerant. A computational model using finite element software (ABAQUS) was developed to simulate damage resistance and damage tolerance of sandwich composites subjected to low-energy impact. The model simulated both the indentation damage event and the subsequent CAI test in a single simulation. The facesheet fiber/matrix damage and core crushing were captured by the model. The model was applied to the facesheet and core parameters tested in the experimental study, and additionally the facesheet thickness was studied by simulating 8-ply specimens. The numerical results were then compared with the experimental results for the same specimen type. For the indentation damage results, the 8-ply numerical results compared better than did the 16-ply results. The CAI strength was greatly over-predicted for all specimen types which shows the need to incorporate all damage mechanisms within the model. It is likely that inclusion of the delamination damage mechanism would lead to a better prediction in CAI strength.