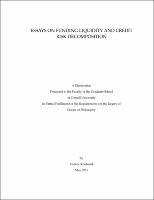 The thesis consists of three essays on Funding Liquidity and Credit Risk Decomposition. The recent crisis has shown the importance of the illiquidity component of credit risk. We model, in a multi-period setting, the funding liquidity of a borrower that finances its operations through short-term debt. The short-term debt is provided by a continuum of agents with heterogeneous beliefs about the prospects of the borrower. In each period, the creditors observe the borrower's fundamentals and decide on the amount they invest in its short-term debt. We formalize this problem as a coordination game and show that it features multiple Nash equilibria. This leads to an ambiguity about the value of the barrier for the liquid net worth which would trigger the default of the borrower. Removing weakly dominated strategies allows us to eliminate the multiplicity of equilibria and determine the default barrier. The unique equilibrium is shown to be of a threshold type, a property assumed in the previous literature. We then extend the model and show the existence of the equilibria in which the company holds cash reserves in order to increase its debt capacity. We prove the existence of the optimal amount of cash on the company's balance sheet and offer a theoretical explanation for the cash holding puzzle. The third part of the thesis connects the sovereign bond spreads and the Debt-to-GDP ratio for the Eurozone countries. The problem of sovereign spreads modeling is well studied in the literature, however their dynamics is rarely considered as a function of macroeconomic parameters. We determine an explicit dependence of sovereign bond spread on Debt-to-GDP ratio, and, based on the bonds yield curve, compute the market perception of Debt-to-GDP ratio.