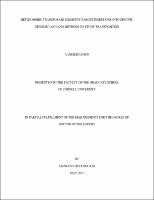 Transposons are mobile genetic elements found in all domains of life that are capable of moving between positions in a genome. The bacterial transposon Tn7 and related elements accumulate in specific insertion sites of the chromosome called genomic islands. The ability to recognize a specific insertion site and control the frequency of insertion involves five transposon encoded genes (tnsABCDE). The Tn7 core machinery is comprised of the atypical heteromeric transposase, TnsAB, and a regulator, TnsC. By using the core machinery and one of two targeting proteins, TnsD or TnsE, Tn7 is capable of inserting into either a chromosomal locus (attTn7) or horizontally transferred DNA. Tn7 is one of at least three families of transposons containing a heteromeric transposase that are found in diverse bacteria across a range of environments. In this work, I analyze ten elements from each of these three heteromeric transposase families and discuss how the conserved proteins within each family relate to TnsD and how those proteins may be responsible for targeting a specific conserved site on the chromosome. I then shift my focus to the other protein involved in target site selection, TnsE, which has been suggested to be species-specific in its interactions with the [beta]-clamp. I find that cells expressing [beta]-clamps from foreign hosts are viable in the absence of the dnaN allele and that TnsE-mediated transposition in strains containing foreign clamps only occurs in the presence of both proteins from the same host. In order to study how TnsE interacts with other host proteins, such as SeqA, a greater set of experimental tools is required. I develop an expression vector to express SeqA and a set of six mutants and suggest an in vitro assay to analyze multiple SeqA- TnsE interactions within one experiment. I then work to develop a high-throughput method for mapping TnsE-mediated transposition events. I use a dam- strain and draw a few conclusions based on where insertions map in seqA- and wild type strains. More importantly, I suggest improvements for the method moving forward that will enable future generations of scientists to map millions of insertion events within a single experiment.