A Conversation with John E. Hopcroft 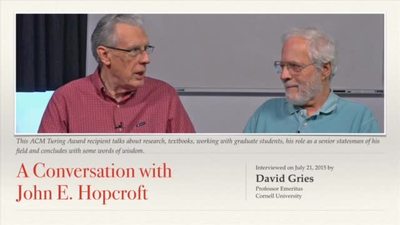 This ACM Turing Award recipient talks about research, textbooks, working with graduate students, his role as a senior statesman of his field and concludes with some words of wisdom.John E. Hopcroft has contributed massively to research, education, and service like no other. His research in theory and algorithms won him the Turing Award in 1986. His early texts set the direction and tone for the new field of CS. His service as Dean of Engineering, member of the National Science Board, and advisor on education and research to universities and governments around the world is mind boggling. With too many awards and society memberships to mention (including at least 5 honorary degrees), in 2016, 52 years after entering the field, John is still going strong. Here, John talks about research, textbooks, working with graduate students, and his role as a senior statesman, concluding with some words of wisdom. Running Time: 37 min. http://hdl.handle.net/1813/40568