The Battle for City Hall: What Do We Fight Over? 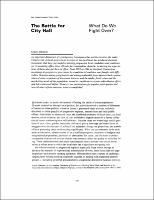 Simmons was part of People for Change, a combination third party and community coalition that won control of the Hartford City Council in 1991 under then-mayor Carrie Saxon Perry. Nicholas Carbone's period of poverty-fighting policies (1969-79) had given way to conservative takeover and conflict while the city's financial condition worsened. There were progressive gains through the later 1980s: a struggle over the effort to implement linkage, labor mobilization around a strike at Colt Firearms, a Legislative Electoral Action Program (LEAP) supported progressive candidates in 1987, and competition with the initially dominant Democratic Party grew. Here Simmons provides detail of her coalition's efforts -- ultimately unsuccessful -- to improve the situation through the 1991-93 period of council control.