The City as a Real Estate Investor 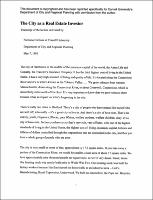 Carbone had been deputy mayor and city council leader for a decade (1969-1979) when he was defeated in a bid for an expanded mandate and the mayoralty. While in office he led the city in a series of policies to counter poverty and financial difficulties. One feature was a series of development agreements whereby the city provided property -- often abandoned or decrepit -- in return for developer agreements to provide local jobs and affordable housing. In this transcribed talk, Carbone provides the rationale and accomplishments in this and other city initiatives in his period of city council leadership.

Transcript of the lecture delivered at Cornell University, Department of City and Regional Planning, May 7, 1981.