HCF-1 inhibits SKN-1 to Modulate Stress Resistance but Not lifespan in Caenorhabditis Elegans AND Determination of Enrichment Regions for H3K27me3 and Other low-signal, High-noise ChIP-seq Data 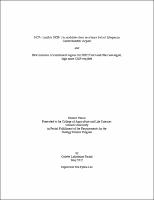 1) Caenorhabditis elegans host cell factor-1 (HCF-1) is an evolutionarily conserved longevity determinant. HCF-1 modulates both lifespan and stress resistance by inhibiting the C. elegans homolog of the mammalian FOXO transcription factors, DAF-16. However, the involvement of other components in HCF-1 mediated longevity and stress resistance has not yet been characterized. We show that SKN-1, the C. elegans homolog of the mammalian Nrf proteins and a major orchestrator of the phase II detoxification response that defends against oxidative stress, is regulated by HCF-1 to modulate oxidative stress resistance but not lifespan. Our findings imply a novel regulatory relationship between HCF-1 and SKN-1 that is revealed only in the presence of oxidative stress. 2) Chromatin modifications are a major mechanism through which cells regulate gene expression. ChIP-seq allows for genome-wide profiling of any DNA-binding protein, including histones. To analyze these data, researchers have developed statistical tools that can identify genomic regions enriched for the DNA-binding protein of interest. Some histone marks, however, bind across broad regions of the genome and produce diffuse and high-noise data profiles that are often difficult to analyze. In this paper, I investigate the ability of peak-callers to analyze ChIP-seq data from H3K27me3, a histone mark known to produce broad regions of enrichment. Further, I present an alternative method that is both faster and simpler than the than the other peak callers investigated. This alternative method offers promise in identifying enriched genomic features when a histone mark, like H3K27me3, generates very diffuse and noisy ChIP-seq data patterns.