A Conversation with Robert Morgan 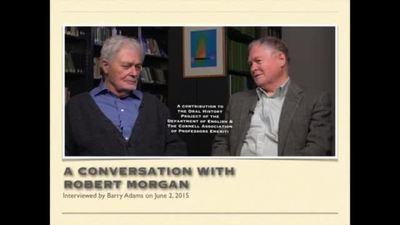 Robert Morgan looks back on his 44 years as a member of the Cornell English Department faculty to recall his pleasure at receiving a carefully worded invitation to teach creative writing at Cornell “for one year only.” Members of the writing program (among them Baxter Hathaway, Jim McConkey, Walter Slatoff, Archie Ammons, and Bill Matthews), as well as other colleagues were happy to see that invitation extended. As an undergraduate Bob had undertaken serious study of math and science before being deflected into literature. His career as writer (punctuated by a memorable endorsement by Oprah) has encompassed poetry, fiction, and history, much of it based on his experience growing up in the American South in a story-telling family. Since retirement he has written several plays drawing on the same material. A major turning point was his successful attempt to compose a semi-fictional account of the death of his uncle in World War II, told in the voice of the uncle’s fiancée.