A Computational Model of Vortex Ring Formation in Hydrogels 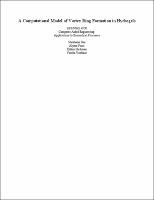 Duo An, a PhD student at Cornell University, is developing a method that uses electrospray technique to expel clay hydrogel droplets into an ion solution. Upon contact, the droplets crosslink and form various solid geometries, including spheres and toroids. Depending on a few factors, including composition of the hydrogel, volume, viscosity, and speed of falling, the hydrogel will form a variety shapes. Toroidal shapes have many applications because they have a greater surface area to volume ratio than spheres. Therefore, clay hydrogels in the shape of a torus have a greater diffusive capacity than spherically shaped hydrogel formations. This allows for greater mass transfer and thus more efficient drug treatment therapies. The current problem is that the specific conditions that cause micro-toroid formation are not well understood. The majority of An’s data has used a larger scale droplet size diameter. This project aimed to elucidate the formation of a toroid shape by creating a COMSOL® simulation that can model the fluid flow and physics on a smaller scale. A pseudo three-phase model was designed to represent the three parts: the droplet of hydrogel, the air, and the ion solution. However, the model had to be implemented as a two-phase problem, due to the three-phase restraints in COMSOL. This was accomplished by implementing the solution and hydrogel as a single phase by defining an initial ion concentration for both the hydrogel and water bath. Additionally, the particle-tracing feature was used in COMSOL to help track the hydrogel species during the simulation. A larger scale model with a diameter of 3.0 mm was first developed to demonstrate toroid formation on a larger scale. Performing a sensitivity analysis on particle number, density, diameter and initial velocity showed that initial velocity had the largest impact on formation of the final product. This reflects An’s findings that varying initial velocities of the hydrogel droplet leads to different spreading and shape formation. In order to further evaluate the model, simulations with different initial velocities were run and their shape formations were qualitatively compared to images and descriptions from An's data. Success in obtaining vortex formation at the large scale indicated that a smaller scale model could be useful in predicting and understanding micro-toroid formation of these hydrogels. Next, the model was scaled down to a 500 μm diameter droplet and the results were compared to the larger droplet. When compared, the small model had similar vorticity trends to the large model at a faster rate. In order to compare the model’s results to An’s, the Reynolds and Weber numbers were calculated and final shape formation images were compared with experimental images for models that matched these numbers. Two of the models showed a similar mushroom shape formation to experimental data. The use of COMSOL to create a scaled down model of An's work helps to provide a better understanding of the underlying physics behind toroid formation of these clay hydrogels. This understanding will lead to better control of the process, in order to produce hydrogels of desired geometries and dimensions, which could give promise for production in future biomedical applications.