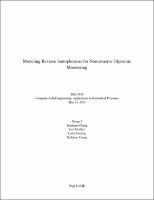 Current methods of glucose monitoring for diabetics are invasive and require blood to be drawn. Despite improved technologies for self-monitoring glucose, patient adherence for these methods is low due to the inconvenience and complexity of the regimen. Several iterations of noninvasive devices have been developed for monitoring glucose levels, but these devices still require direct blood glucose analysis for calibration purposes. Therefore, a current focus in diabetes research is developing standalone noninvasive methods that do not require direct measurements. Although still in the proof-of-concept phase, a promising alternative to current treatments is a temporary tattoo glucose sensor. This glucose monitoring system consists of a removable device in the form of a decal-style temporary tattoo with an electrochemical sensor. The sensor has two electrodes that apply a voltage to the skin that brings glucose to the surface, a concept known as reverse iontophoresis. In reverse iontophoresis, ions flow diffusively in the medium in the direction opposite of the current resulting from the applied voltage. In the glucose sensor, the movement of sodium ions towards the cathode creates an osmotic pressure gradient. This pressure gradient drives water to the cathode, bringing interstitial glucose along to the cathode. At the cathode, the glucose reacts with glucose oxidase, transducing the glucose concentration into a measurable visual signal. Research on non-invasive glucose monitoring is still very much in its nascent stage. This project seeks to enhance the current understanding of the coupled physics behind the glucose monitoring process, as this has yet to be established. There is little modeling on the physics of any glucose monitoring system, despite their existence for the past 20 years. Published research mainly focuses on direct glucose measurements or signal correlations rather than describing the physical processes involved. The model described in this report focuses on defining the coupling of the different physics in the glucose sensor, and does not simulate the visual signal for the glucose level reading. The main goal was to optimize the design of a proof-of-concept glucose sensor described by Bandodkar, et al. in 2015. We validated our model by comparing our extracted glucose values to experimental values reported by Ching, et al. in 2008. Our final extracted glucose values were consistently within the range of their trial results, suggesting that our model closely mimicked experimental results. From our sensitivity analysis, we found that our model was most sensitive to glucose diffusivity, initial glucose concentration, and the reactive flux. However, it was not very sensitive to the parameters that we wanted to use to optimize the design: voltage and inter-electrode distance. We determined that this was because diffusion through the skin occurred slower than the reactive flux boundary extracted glucose, creating a diffusive shell around the cathode. Further work on our model will involve understanding and optimizing the reactive flux boundary, such that we minimize the presence of the diffusive shell. Additionally, the model will incorporate the glucose oxidase-containing gel layer between the skin surface and electrodes and the conversion of the extracted glucose into a measurable signal for glucose monitoring.