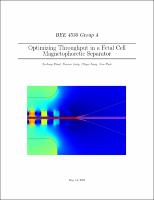 Magnetophoretic separation is a non-invasive method under development for the sampling of nucleated fetal red blood cells (NRBCs). By inducing a magnetic field gradient symmetrically about a microfluidic separatory channel, blood cells may be separated based on their inherent magnetic properties [1]. Diamagnetic red blood cells (RBCs) are magnetically attracted into lateral side channels, while others cells, e.g. white blood cells (WBCs), are paramagnetic and repelled into the center waste channel. We aimed to model the first phase of a complete lab-on-chip device for the separation of RBCs from maternal circulation in order to isolate NRBCs for fetal diagnostics. Simulation results from COMSOL implementation revealed that seven out of ten RBCs successfully traveled to the intended lateral channels while three out of ten traveled through the center channel. All ten WBCs ended up in the center channel as intended. The three RBCs were collected in the middle channel due to their starting position. At the center of the channel before the fork, the magnetophoretic force was very weak and close to zero because magnets from both sides of the channel apply a force on those cells. In order to improve the efficiency of the magnetophoretic separator, the geometry of the channel was changed. An initial bifurcation was implemented that caused unilateral application of the magnetophoretic force before the main channel re-converged. By doing so, the initial force balance was broken and separation effi ciency was improved from 70% to 90%. Additionally, in order to improve device throughput the inlet velocity was subject to optimization. Using an objective function penalizing loss of RBCs and WBC contamination, an optimum inlet velocity of 0:875 mm x s-1 was determined. These actions constituted steps in solving the speed and accuracy constraints that have prevented successful commercialization of such a device. In doing so, model validation provided the basis for future manufacturing and testing and satisfied our motivation in developing safer fetal diagnostics.