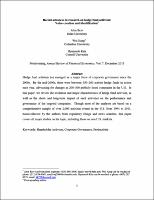 Hedge fund activism has emerged as a major force of corporate governance since the 2000s. By the mid-2000s, there were between 150–200 activist hedge funds in action each year, advocating for changes in 200–300 publicly listed companies in the U.S. In this paper, we review the evolution and major characteristics of hedge fund activism, as well as the short- and long-term impact of such activities on the performance and governance of the targeted companies. Though most of the analyses are based on a comprehensive sample of over 2,000 activism events in the U.S. from 1994 to 2011, hand-collected by the authors from regulatory filings and news searches, this paper covers all major studies on the topic, including those on non-U.S. markets.